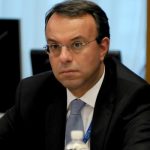 A few months since coming to power, the Kyriacos Mitsotakis government has managed to turn around the climate surrounding the Greek economy and regain the trust of its partners, Finance Minister Christos Staikouras told Ethnos on Sunday newspaper in an interview.

“Thanks to its responsibility, seriousness and clear planning”, the government has managed to get the country’s international creditors on side, in the effort to resurrect the economy after a protracted economic crisis the Finance Ministry chief argues.

Staikouras revealed that he plans to make permanent an annual bonus paid out to pensioners, without jeopardizing fiscal stability. “We will assess the fiscal data at any given time and try to utilize them in the best possible way to the benefit of the country and the many”, he said.

Moreover, the Finance Minister heralded further tax reforms, including changes to income, road and property tax rates, while plans are also been drawn up to reduce social security contributions for full-time workers and support poor households.