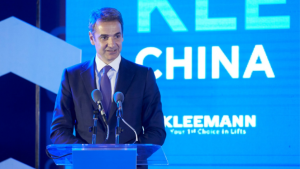 Greece has great comparative advantages as a commercial hub and tourist destination because of its geo-strategic location, cultural heritage and natural beauty, Prime Minister Kyriakos Mitsotakis said in an interview with the Chinese television network CGTN.

The prime minister noted that ships carrying goods from Asia to Europe would save seven to ten days if they opted for a destination in the port of Piraeus, which is a natural gateway for goods, rather than sailing to northern European ports through the Gibraltar Strait.

He stressed that Greece is open to investments while reiterating that the ultimate goal is to transform Piraeus into Europe’s largest port. He pointed out that the new Greek government approved within two months a new series of investment projects that would significantly upgrade the port.

“Greece is ‘open for business’, we are attracting Chinese, European, American, Japanese investments, but I would like to note that the Chinese invested in the port of Piraeus when very few other countries were considering direct investment in infrastructure in Greece. Therefore, it is a project that will go ahead. This is a commitment we have made and I sincerely believe it is a win-win project for all”, the Prime Minister said.

Mr Mitsotakis stressed that the Greek government is determined to make the most to open up the large Chinese market in goods, as it seeks to stimulate export-driven growth.

He said Greece wants to expand its footprint in the agri-food market, where it has -among other things- high-quality wines, dairy products and olive oil, especially when the large Chinese middle class comes into contact with new gastronomic stimuli.

“Our intention is to make our presence felt in China”

Greek products will also benefit from the extremely important agreement between China and the EU on the protection of geographical indications, guaranteeing the uniqueness of quality goods, such as feta cheese.

On tourism, the Prime Minister reiterated that his goal is to attract 500,000 visitors from China by 2021, noting that our country is the first country on the route from China to Europe and can provide a unique experience thanks to its rich history.

“If you are a Chinese and you come to Europe, you have to come to Greece”, he noted, adding that the “cultural bond” between two ancient cultures such as the Greek and Chinese is unique.

He stressed that Greece has a strategy to stimulate cultural exchanges and tourism and in this context 2021 will be a Year of Culture and Tourism.

The Prime Minister noted the second direct flight between China and Greece (from Shanghai to Athens). But he pointed to the Greek side’s desire to see even more direct connections and greater visibility of Greek services on large online travel platforms.

“We can have Chinese film companies shoot and produce films and series in Greece, this will help the wider Chinese public understand what Greece means”, he stated.

Mr. Mitsotakis also noted that our country is geographically a natural bridge between China and the European Union, adding that despite the differences, both sides are aware that the major challenges of the time -such as climate change- require collective action.