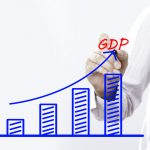 The growth rates have proven to be significantly higher than those initially announced in July, resulting in a 2.3%-economic growth-rate at the end of the third quarter, higher than the 2.0% projected by the new budget.

According to ELSTAT data, growth ran at a 0.6% rate in the third quarter in comparison to the second quarter of 2019, yet the most impressive news comes from the revision of data for the first two quarters, when the economy grew much faster than what was announced; more specifically:

* While a 0.2% growth-rate was initially announced in the first quarter on a quarterly basis and 1.1% on a yearly basis, those figures are now being revised to 0.4% and 1.4% respectively.

* In the second quarter, the initial forecast was for a 0.8% GDP-growth on a quarterly basis and 1.9% on a yearly basis; growth rates were revised to 1.8% and 2.8% respectively.

This development indicates that the peak of the upward trend was observed in the second quarter at an annual rate of 2.8%, while in the third quarter a slight 2.3%-slowdown was recorded.

According to the latest data, the annual growth rate on September 30 stood at 2.1%, moving higher than the budget forecast of 2.0%.

In the third quarter, total final consumer expenditure decreased by 0.4% compared to the second quarter; gross fixed capital formation fell by 5%, while exports surged by 4.5% (goods by 2.4% and services by 6.7%). Imports went up by 0.6% (goods decreased by 1.0% while services increased by 8.1%).

On a yearly basis, total final consumption expenditure increased by 0.5% and gross fixed capital formation by 2%, as: