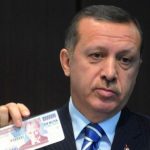 The Turkish lira looks like it has been fairly steady in recent days, but behind the scenes a battle is raging to hold it up against the US dollar.

Like many emerging-market currencies, the lira has crumbled under the strain of coronavirus and the large interest-rate cuts that policymakers have launched to support the economy.

But for more than a week, every time the dollar has threatened to break above 7 to the lira — a level last seen in the country’s 2018 currency crisis — it has been pushed back down again under a wave of dollar selling.

“It’s actually quite interesting seeing someone trying to give two fingers to economic or financial logic,” said one foreign fund manager, who asked not to be named. “They’re really digging themselves quite a decent hole.”

The country’s foreign currency reserves have plummeted since the start of 2020. Gross reserves, including gold, have fallen more than $17bn this year to under $88bn.

Turkey may be using Qatar-sponsored Al Jazeera to smear Greece