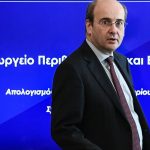 Environment & Energy Minister Kostis Hatzidakis said that Greece will make the most of European funds to restart the economy, speaking at the informal video conference of EU environment and climate ministers held Tuesday.

The ministers discussed how to advance the green agenda in order to build a more sustainable and competitive policy during the Covid-19 pandemic’s aftermath, and Hatzidakis pointed out that “environmental and climate policies can contribute decisively to recovery.”

Speaking on the EU’s Recovery Plan which is currently under negotiation, he noted that the proposal will contribute long term to the goal of achieving a climate-neutral Europe by 2050.

The Greek government’s policy priority remains the complete phase-out of lignite dependency for electricity production by 2023, said the minister, adding that the legal framework for electrokinesis to take off in Greece is near completion.