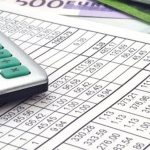 The general government balance showed a deficit of 7.494 billion euros in the five-month period from a budget target for a shortfall of 2.512 billion euros.