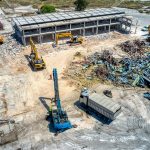 Work has begun on the demolition of airport buildings in Elliniko. The bulldozers started work early this morning, while at 8.30 on Friday morning it is planned to hold the inauguration ceremony for the emblematic investment, in the presence of Greek Prime Minister Kyriakos Mitsotakis.

It took six whole years for Lamda Development to emerge as the preferred investor to launch Elliniko’s big project.

Now with the official signal for the preliminary works that have already begun, it is expected that the full scale construction will take off by  September.

The demolition of the first buildings and the landscaping of the area is a landmark that also gives an international signal that Greece is coming back and with great prospects.

The first demolition started from five buildings which have been determined by a ministerial decision of the Minister of Development, Mr. Adonis Georgiadis.

It is a complex of connected buildings right next to the facilities of the former western airport.