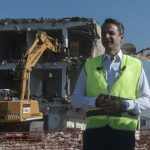 “Today is a very important day, a symbolic day. By demolishing the old useless buildings of the old airport, we are laying the foundations for the new Helliniko. One of the largest, perhaps the largest project in the Mediterranean, will be realised in this – for 19 years abandoned – area,” Prime Minister Kyriakos Mitsotakis, who attended the launch of the works at the former Helliniko airport, said on Friday.

Russia: We expect a balanced decision on Hagia Sophia

“This project symbolises Greece as we envision it,” the prime minister said in his speech from the worksite.

“It is the largest coastal park in the Mediterranean, but at the same time it will become a growth lever. In its full operation, Helliniko will create more than 80,000 jobs, 10,000 jobs will be created only during the construction phase. It will be a modern, ecological, environmentally friendly project, a project that will mark the beginning of a new era for Greece as we all envision it,” Mitsotakis underlined.