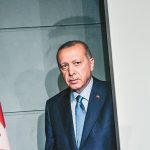 International financial institutions have tried to get rid of the Turkish currency, as the cost of borrowing in Turkish lira has skyrocketed. However, many of them failed to close positions in the Turkish currency, as a result of the policy pursued by the Erdogan government and which undermines the liquidity of the pound in international markets, according to sources who spoke to -.

International banks were unable to trade due to restrictions imposed by the Turkish government, forcing them to keep the pound at the overnight rate at 1.050%, the highest level since March.

However, yesterday’s move did not go unpunished, as the banks took their revenge today, proceeding with massive sell-offs of the lira, with the Turkish currency recording losses of more than 2.2% against the dollar and the exchange rate exceeding the psychological limit of 7, formed at 7,084 pounds per dollar.

Restrictions by the Turkish authorities are a tactic they have followed in the past, creating a technical liquidity crisis in the lira, in order to prevent an erratic devaluation of the currency.

The technical crisis has left foreign banks unable to trade as it did yesterday, with authorities temporarily barring Turkish banks from trading with Citigroup, UBS and BNP Paribas.

The worm is in the fruit: A rising strategic foe inside NATO

The latest move by the Turkish authorities follows their strong interventions in the foreign exchange market last week. Dollar sales by state-owned banks to support the lira began after a public holiday, restricting the supply of currency which pushed the day-to-day lending rate offshore to its highest level in 17 months.

The Turkish Central Bank’s foreign exchange reserves have fallen more than a third since July 17 to $ 49.2 billion, including gold, to $ 89.5 billion. Of that, more than $ 54 billion has been borrowed from domestic banks through short-term exchanges, according to the latest available data by the end of June.