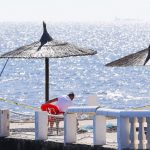 Most European sovereigns, including Greece, can weather a prolonged tourism slump, Moody’s said in a statement on Monday, according to ANA.

The drop in tourism in the countries of the European South is likely to last beyond 2020, but they can weather a prolonged tourism slump thanks to the adjustment they have made in recent years and the significant support from the policies of the European Central Bank and the EU recovery fund, it said.

The European countries most exposed to the fall in tourism – due to the importance of the sector in their economies – are Portugal, Greece, Malta, Spain, Cyprus, Croatia, and Italy, according to Moody’s adding that the sector will remain weak beyond the 2020 travel period.

Despite the lifting of travel bans between EU countries, it explained, continuing consumer health and safety concerns, quarantine rules and economic recession due to the crisis means that the current downturn is increasingly likely to last beyond the summer of 2020.