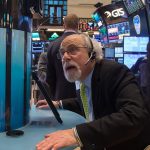 And hopes for another stimulus measure from Congress flagged as lawmakers focused on a fight over a Supreme Court nomination following the death of Justice Ruth Bader Ginsburg.

Exotic particle that has never been seen before found at CERN

Bank stocks fell after a news report that JPMorgan Chase, Deutsche Bank and other giant banks defied money-laundering crackdowns. JPMorgan Chase fell more than 4%, Citigroup was down 3% and HSBC was down 6%.

A surge in COVID-19 cases in the United Kingdom raised fears of another lockdown there. Lockdowns have ripple effects that hurt several industries, including travel. Airlines stocks plummeted Monday, with United Airlines down 7.5% and American Airlines down 6.4%.