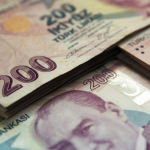 Turkey’s central bank has dented hopes for a return to economic orthodoxy, ignoring calls from many investors to raise its main interest rate and sending the lira to a new record low.

The currency fell more than 2 per cent immediately following the decision to keep the benchmark one-week repo rate on hold and instead tweak the cost of borrowing through an obscure emergency facility.

The lira, which has lost about a quarter of its value against the dollar so far this year, teetered on the brink of the symbolic level of 8 to the buck after the decision. It later strengthened to TL7.963.

Australian soldiers killed Afghan prisoner as only six could fit on American helicopter, US marine claims

Sharks linger off California coast in record numbers, lab finds. “The question is why”

Phoenix Kalen, an emerging markets strategist at Société Générale, said a rise to the main rate would have sent “a credible signal” to investors that the central bank was “addressing the deterioration in inflation expectations and continuing with the gradual shift back towards more conventional monetary policy”

“But clearly we did not see that,” Ms Kalen added, saying that the bank had instead returned to a strategy of “stealth tightening”.