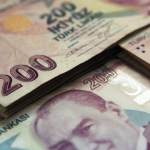 Turkey has spent $101 billion to intervene in its currency markets so far this year, Goldman Sachs estimated on Thursday.

Interventions in September amounted to $6.4 billion, Goldman Sachs’ Murat Unur wrote in a note to clients. This was lower than the January to August average of $11.8 billion “but still a sizable amount in our view, given where the gross foreign exchange reserves are”, Unur added.

Turkey’s central bank does not publish any FX intervention data. Goldman Sachs said it derived the number from calculating the difference between the actual and expected changes in net foreign assets of the central bank and added there was a large range of uncertainty around these figures.

Turkey’s lira has weakened nearly 30% against the dollar since the start of the year.