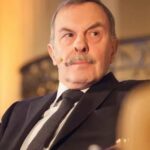 Ioannis Angelicoussis, a billionaire Greek, owner of the Angelicoussis Shipping Group had died at the age of 73.

The emblematic shipowner passed away this morning after being treated in hospital for a long period.

He suffered a heart attack on Saturday, March 20 at his home. He was immediately taken to hospital where doctors put him in sedation.

He was the most powerful private shipowner. The group of three companies has a fleet, which consists of a total of 149 ships. Maran Dry has 49 cargo ships with an average age of 9 years, Maran Tankers 54 crude oil tankers, two of which are under construction and Maran Gas 46 vessels, of which 36 LNG on water, 9 under construction and one floating LNG storage tank, known as FSRU.