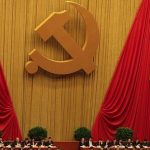 Like a pistol shot in 1914 Sarajevo, Covid can be seen as a chance event ushering in the end of a tottering old world and the beginning of a new one. A historical accelerant speeding along changes that were, perhaps, always inevitable. The West’s lacklustre handling of Covid compared to China’s top-down authoritarian statism has been a wake-up call to the American establishment; a sobering dry run for the period of “extreme competition” we have now entered. Joe Biden’s note of alarm yesterday, after his two-hour phone call with Xi Jinping, that “if we don’t get moving, they’re going to eat our lunch,” marks a shift of historic proportions.

In his detailed analysis for the New York Times Noam Schreiber notes that Biden’s new Build Back Better industrial policy is “deviation from the free-trade gospel” calling for $400 billion in government procurement of American-made equipment, $300 billion for research and development, and hundreds of billions more in subsidies to promote domestic manufacturing.

As the article notes:

“China is effectively forcing other countries to adopt some of its own industrial policies, because a free market in which only one side plays by the rules isn’t so much a market as a sucker’s game… after decades of free-market orthodoxy in which protectionism became taboo among both parties’ elites, it is the rise of China, above all else, that is bringing nationalistic management of the economy back into the political mainstream.”

Greece is the second most popular pick for European holidaymakers

We’ve been here before, of course. The world before 1914, as Keynes famously observed, was one of globalisation overseen by British imperial hegemony, the first End of History when the economic and political liberals of the day, like those of our own time, “regarded this state of affairs as normal, certain, and permanent, except in the direction of further improvement, and any deviation from it as aberrant, scandalous, and avoidable.” Yet great power competition brought the first age of globalisation shuddering to a halt, in a catastrophic collision with reality from which Britain and Europe have never recovered.