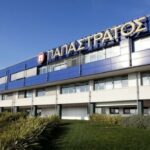 Philip Morris International was present at the 6th Delphi Economic Forum, where the company’s top executives described how the well-known company and its Greek subsidiary, Papastratos S.A., are putting sustainability into practice with their shift to new products with potentially reduced risk.

The discussion of an important contemporary issue concerning modern businesses, entitled “Sustainable Leadership and the future of growth/advancement/development”, caused a great sensation and interest in the Economic Forum of Delphi, which took place at the Zappeion Megaro from the 15th to the 20th of May. The discussion was steered by Marianna Skylakaki, publisher and editor-in-chief of the online newspaper AtheNea (a8inea.com), and was attended by Mr. André Calantzopoulos, Executive Chairman of the Board of Directors, and Mr. Jacek Olczak, CEO at Philip Morris International. They both stated, among other things, that potentially reduced-risk tobacco products are the future of the tobacco industry and, at the same time, they described the vision and the actions of Philip Morris International and its subsidiary in Greece, Papastratos S.A. towards this direction.

Aiming for a different world, driven by consumer education
“In 10-15 years from now, cigarette sales could even cease in some countries, under certain conditions, of course. First, smokers must have alternatives; namely, products with a scientifically proven reduced risk profile and incentives for consumers to choose them, such as tax breaks. According to our company’s data, these products are gradually winning over our consumers. We aim to inform the public in a responsible way.”
However, changing consumer habits is not an automated process, which is why Philip Morris International is trying to move gradually towards a tobacco-free world. As Jacek Olczak said: “Part of our restructuring and, one of the key elements of our success to date, is the gradual pursuit of a tobacco-free future, with consumers at the very centre. Providing access to information about new products to help consumers change their habits is one of our key tactics. We are very open to partnerships with the scientific and medical communities. We already run more than 80 studies analysing the differences between innovative products, such as IQOS, and combustible cigarettes.”

Harm reduction
One of the topics on which the discussion focused was that of harm reduction. As Mr Calantzopoulos explained, addressing especially that part of the public, who were not familiar with the topic, that: “Harm reduction is all we are trying to do on this planet. Our consumer behaviour, as well as our product or service, if you will, has negative connotations, which we are trying to eliminate. If we can’t eliminate it, at least we try to reduce it. By the same token, in order to deal with climate change, we are gradually replacing fossil fuels with wind and solar energy. It is the principle of mitigation. In smoking in particular, the best thing people should do is clearly to quit or, even better, to never pick up the habit. Yet, if they cannot quit, they should at least have an alternative that would have less negative impact on them in particular and society in general. What we are trying to do is to reduce, through non-combustion products, people’s exposure to toxic substances to the maximum extent possible.”

Business transformation; one way to sustainability
But how does the transition to a world of less harmful products work in practice for Philip Morris International? “Our ambition for transormation requires very significant organisational change. From a classic cigarette company with fixed production conditions, after many decades we are entering unprecedented processes involving electronics, new supply chains and our own retail stores. Everything we do now requires a different functioning way and is designed to reduce the damage. We are providing smokers with an alternative that has a lower impact on them and on society,” said André Calanzopoulos.

Papastratos S.A. continues to invest in Greece
Referring to Philip Morris International’s activity in Greece, Mr. Andre Kalantzopoulos said: “Papastratos S.A. has played a very important role in both Greek economy and society throughout the years. Today, Papastratos S.A. is a factory exclusively producing heated tobacco sticks and exporting in many countries. At the same time, we continue to invest in Greece in other sectors, such as technology and research, which are equally important at local level. Human resource development and specialisation are very relevant to us as a company, given the transformation we are pursuing, as we have discussed above”.
Jacek Olczak added that Papastratos is celebrating its 90th anniversary this year, while expressing the belief that on the company’s hundredth anniversary, Greece may be a country without cigarette smoke.