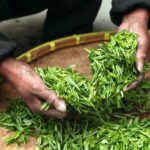 The largest sales of tea in the world are generated in China – followed by Brazil, India, and Japan – as shown in this infographic based on a market analysis from the Statista Consumer Market Outlook. With an approximate volume of 85 liters drunk annually per person, tea represents the most consumed hot beverage worldwide and even the most consumed non-alcoholic beverage. The drink plays a particularly important role in Asia, South America, Russia, and the United Kingdom.