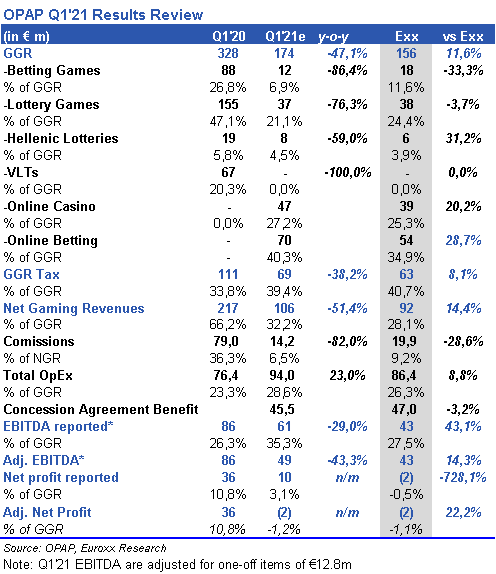 OPAP’s Q1’21 results were above our call at GGR and EBITDA level largely due to the strong on-line gaming and Betting performance (including Stoiximan ops, which are reported with OPAP’s in-house on-line reves. In general, quarterly figures were satisfactory, when accounting for the extended lock-down imposed on all OPAP stores during the longest part of the quarter.

Turning to segmental performance, Lottery and Betting registered heavy GGR contraction during Q1’21, (€37m, -76% y-o-y and €12m, -86% respectively), as OPAP stores remained closed for c.4/5 of the quarter. Moreover, VLT’s generated zero GGR, as OPAP “PLAY” stores remained closed throughout the quarter (now expected to reopen on 24May’21). On the positive side, OPAP on-line Betting and Casino games (including Stoiximan) reached €117m, accounting for c.2/3 of Group GGR. Finally, Instants and Passives continue to underperform, with the segmental GGR in Q1’21 down by 59% to €8m.