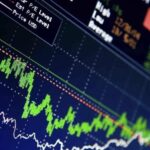 According to information, the interest rate will be set close to 0.90%.

Turkey: Marine mucilage hitting the Sea of Marmara spreads to the Black Sea