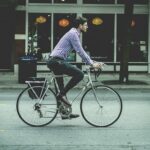 When the COVID-19 pandemic hit the United States in March 2020, forcing gyms to shutter and public transportation to suspend operation, millions of Americans re-discovered bicycles as a safe, socially-distanced form of physical exercise and transportation. The latest bike boom hit retailers unprepared, causing new bicycles to become a scarce commodity, exacerbated by the fact that global bicycle supply was also constrained due to COVID-19.

According to inflation-adjusted figures published by the U.S. Bureau of Economic Analysis, Americans spent $6.9 billion on bicycles and accessories in 2020, up from $6.1 billion the year before. The trend continued in early 2021, with the increase in bicycle spending even picking up pace. Looking at quarterly figures seasonally adjusted at annual rates, consumers were on track to buy bicycle equipment at an annual rate of $8.2 billion in Q1 2021, up from pre-pandemic spending that hovered around $6 billion for years.

It will be interesting to observe how bicycle spending develops going forward, as life gradually returns to normal and the possible effect of several rounds of stimulus checks on bicycle purchases recedes.