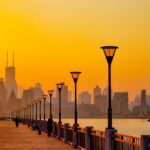 The number of Chinese and Hongkongese companies going public in the United States has been consistently high in recent years, as data by Renaissance Capital shows. 2021 is bound to set another record as 24 companies have hit Wall Street in only the first quarter, in line with the recent IPO boom that has accompanied the COVID-19 pandemic.

On June 30, Chinese ride-hailing provider Didi debuted on the New York Stock Exchange, earning $4.4 billion at a valuation of $68 billion. The IPO was the second biggest ever of a Chinese firm in the U.S. after the blockbuster offering of Alibaba in 2014. The e-commerce giant earned $21.8 billion in the IPO, making 2014 the year with the most funds raised by Chinese companies by far. 2010 saw the most Chinese companies’ IPOs on Wall Street – 40 -, but back then, only a meager $3.9 billion were raised, according to Renaissance Capital.

Despite the current IPO rush, it’s unclear if any of the two records will be broken in 2021. SPAC IPOs have traditionally not been counted by Renaissance. As a record number of these IPOs have been taken place in 2021 some companies and funds might be lost in the count.