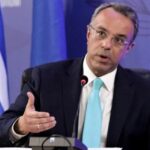 The Greek Minister of Finance, Christos Staikouras, announced in an interview with state broadcaster ERT on Wednesday that the settlement of all the debts incurred during the pandemic would have more installments than the ones that are in force today. He said that over the next period, market support measures amounting to 4.5 billion euros would be implemented.

Staikouras stated that in the teleconference with the heads of the EU institutions tomorrow, Thursday 15 July, in the context of the 11th evaluation, there would be a conclusion for the new regulation concerning the debts of the pandemic, from March 2020 until now, adding that “we have essentially come up with the best solution”.

The Minister of Finance confirmed that the Greek side is very close to an agreement with the institutions for a more favourable settlement regarding the debts created during the pandemic.

As he outlined, the new regulation would apply to the affected business categories, ie those included in the extended list of the KAD (business codes) of April, the ones on work suspension or in the program “SYN-ERGASIA”, property owners with “Covid Declaration” and the unemployed registered with OAED .

The minister did not want to specify the amount of the installments, but said that it would be something better than the current regulation of 24-48 installments, for a longer period of time and for more people. He clarified that the measure of exemption from rents will not be extended to other restaurants, but in July it would be limited to a few industries that remain closed by government mandate. He also said that so far the state has paid out 650 million euros to property owners for the “slashed” rents they received.

Record exports for Greece in first 5 months of 2021