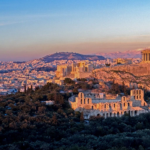 The International Monetary Fund (IMF) forecasts a growth rate of 3.3% for this year and 5.4% for 2022 in its Report on the Greek economy in the context of the regular audit carried out in all member states (Article IV).

The IMF notes that despite the pandemic, reforms have continued in several areas, albeit at a slower pace than in the recent past. It describes Greece’s response to the pandemic as timely & effective which made the economy remarkably resilient with positive prospects.

It is noted that in April the IMF in its Report (World Economic Outlook) predicted that this year the Greek economy will grow at a rate of 3.8% after the decline of GDP by 8.2% in 2020.

It acknowledges, however, that the Greek government has implemented one of the largest fiscal programs in the EU to deal with the effects of the pandemic and to alleviate businesses and workers affected by it.

Regarding the budgetary impact of the measures implemented by the government to deal with the crisis, the IMF predicts for this year that the primary budget deficit will reach 7.2% of GDP.

The IMF estimates that the country with the help of the resources that will flow from the Recovery Fund will enter a virtuous circle. The growth of the economy, combined with the increase of credit expansion and the reduction of taxation together with the upgrade of the country’s creditworthiness in investment grade will contribute, among other things, to the further reduction of red loans and the improvement of Public Debt sustainability.

According to the IMF, the government should use the additional resources that will flow from the Recovery Fund in order to consolidate a sustainable fiscal policy mix. Reductions in corporate income tax rates and tax advances are measures in the right direction, as they strengthen investment incentives and maintain stable liquidity.

However, according to the IMF, the emphasis should be on improving the mix of expenditures included in the Budget. In the short term, this means addressing the gaps in the Guaranteed Minimum Income system, while support should shift from job retention to targeted income support and reintegration.

For the developments in the banking sector, the IMF welcomes the expansion of the state guarantees program “Hercules 2” to further reduce red loans.

However, it encourages the government to consider additional measures, such as the Bank of Greece’s proposal to create an asset management company. This is because, as it argues, in the event of management difficulties, which are mainly related to the increase in the share capital of banks, the high rate of deferred tax on the share capital of banks will shake investor confidence.