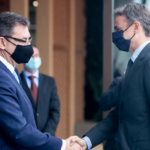 In his introductory statement, the Greek head of Pfizer, Albert Bourla, noted that Thessaloniki is changing with the company’s investments in the city, creating jobs and emphasizing the advantages of our country and putting Greece strongly on the investment map.

“Pfizer’s investments contribute to the local and national economy”, Mr Bourla said, adding that Greece has the human resources to create a knowledge-based economy and now is the time to unleash that momentum.

“The employees at the Pfizer center have already exceeded 500, most of whom are scientists with postgraduate degrees and 15% of them are Greeks from abroad who returned to their homeland to work here”, he said.

Pierrakakis: In the coming weeks comes the digital renewal of passports

He also added that according to a study by IOBE, Pfizer’s investment in Thessaloniki in the next 10 years will increase the GDP of Thessaloniki by 0.4%.

In Thessaloniki alone it will offer no less than 650 million euros.

The Prime Minister was welcomed earlier by the CEO of the company, Albert Bourla, who is born and raised in Thessaloniki, followed by a tour of the multinational company’s facilities.