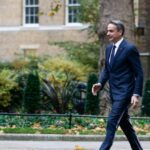 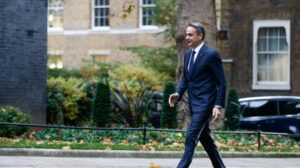 Greek Prime Minister Kyriakos Mitsotakis had a series of meetings with foreign investors in London, outlining the prospects of the Greek economy for long-term growth, something that is reflected in the assessments of all international organisations.

According to government sources, the meetings were attended by heads of financial institutions and fund management companies, as well as heads of international companies in the fields of energy, real estate, infrastructure, technology, and heavy industry.

The PM noted that the government supported workers and businesses during the pandemic, resulting in employment increasing and unemployment constantly falling. He underlined that growth now came from investments in new sectors, such as those of technology and the green economy.

The PM said Greece has a stable political environment and a government with a large parliamentary majority.

Government sources report that the Greek Prime Minister informed foreign investors about the investment-friendly environment and the drastic reduction of bureaucracy in Greece, referring, among other things, to the rapid digital transformation and operation of the portal gov.gr, which, as he stressed, facilitates the interaction of Greek citizens and businesses with the state. He also presented the implementation of the government program for the reduction of taxes and mainly on the stability of the framework that Greece now offers to foreign investors.

The prime minister stressed the confidence of the markets, but also the fact that the country was borrowing at historically low-interest rates.

According to the same sources, the PM outlined the intense interest expressed as a wave of foreign investments entered the country in recent years, like global companies such as Microsoft, Pfizer, Cisco, and Digital Realty.

Investors expressed their confidence in Greece, noting the positive changes that are taking place in the country and the economy, making it more attractive for investment.

The Prime Minister also emphasised the talent and skills of Greeks living inside and abroad, talking about the country’s new opportunities, in addition to reforms, tax cuts, and an investment-friendly environment.

He added that companies that decide to invest in Greece offer well-paid – and often highly skilled – jobs to Greeks, while also contributing to the reversal of the brain drain that hit the country in the past decade.

Tsitsipas retires from ATP Finals due to elbow injury