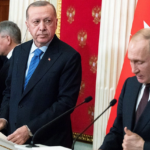 Vladimir Putin expressed his acceptance of the “aggressive” policies of the Bank of Russia to curb inflation, during the press conference for 2021, while leaving tips for Erdogan’s policy in Turkey. “I know there is dissatisfaction in the real economy with interest rate hikes”, he said.

The Bank of Russia raised its key interest rate by 100 basis points in its last meeting of the year last week, bringing the total to 425 basis points in 2021. It also warned that more increases may be needed to tame inflation which is at 8.4%, more than double the original target of 4%.

Russia has avoided a crisis like the one that plagues Turkey, where the Turkish Lira has lost about 50 percent of its value since September as President Recep Tayyip Erdogan relied on the country’s central bank to cut borrowing costs, trying to attract investment and support its declining popularity.

The key interest rate, after four consecutive reductions, has fallen to 14%, with inflation rising by more than 7 percentage points to 21.3%. These moves have, of course, shaken investor confidence, while not offering the slightest guarantee in international markets.