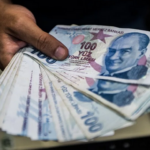 Turkey’s lira weakened by as much as 2% on Tuesday, extending sharp losses seen a day earlier and eroding massive gains made last week, as worries about the country’s monetary policy weighed on sentiment.

The lira surged more than 50% last week following billions of dollars worth of state-backed market interventions and a government move to cover FX losses on certain deposits, bringing the currency back to its mid-November levels.

President Tayyip Erdogan announced last week an incentive for savers to convert forex deposits into lira, under which the Treasury and Central Bank will reimburse losses incurred due to an erosion in lira value during the deposit period.

According to a central bank document sent to banks on Monday, it will support these forex-protected lira deposit accounts by not applying required reserve ratios on them. It will impose a higher commission on banks when the transfer from forex accounts to lira accounts does not exceed a certain level.