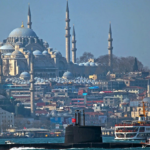 The Osmangazi suspension bridge, one of the world’s longest, opened in 2016, stretching nearly 2,700 metres over the Marmara Sea. Combined with a new road, it has halved the travel time between Istanbul and Izmir, Turkey’s largest and third-largest cities. But for many Turks, the country’s currency crisis has made the crossing unaffordable. A driver making the trip every day for a month would have to pay tolls amounting to twice the minimum wage. The toll will rise again at the start of 2022.

Turkey’s president, Recep Tayyip Erdogan, has decked out his country with scores of new bridges, tunnels, airports and hospitals. Most are public-private partnerships (PPPs), deals whereby companies construct and operate infrastructure in exchange for fees from consumers or payments from state coffers. The lira’s slide over the past year has dramatically raised the cost of PPPs to taxpayers. The government guarantees companies involved in such projects a minimum level of income, almost invariably in hard currency.

Any aliens living around 1.004 nearby stars should be able to see the signs of life on Earth, a study says

Such guarantees amount to a total of $150bn in the coming two decades, estimates Ugur Emek, an academic at Baskent University in Ankara. At the start of 2021, that was equivalent to 1.1trn lira. By late December, it had risen to 1.7trn lira.