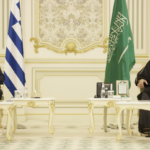 It was like a bang when Prince Mohammed bin Salman assessed his country’s relationship with Greece during his joint appearance with the Greek Prime Minister Kyriakos Mitsotakis. Relations are historically and traditionally good, but now a new phase is to be heralded. Greece is to become the European hub for hydrogen.

This was new for many, surprising and seemed like a glimpse of the future. Indeed, since the announcement of the WhiteDragon project in Western Macedonia, Greece has been on the European map of hydrogen projects.

The Greek government was actively involved and achieved great success in July when two projects within the framework of the so-called ipcei (important projects of common European interest) were recognized by the European Commission in the first phase.

More will follow, meanwhile top-class greek companies with a keen interest in hydrogen are bustling about in Greece, which at the same time represents the who’s who of the Greek economy. The White Dragon project and its project coordinators triggered an initial effect that brought many companies to work together for the first time and set off for new shores.