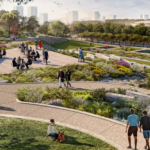 The Ellinikon is a planned city of 2.3 square miles on the outskirts of Athens. It will be about twice the size of Central Park and three times the size of Monaco, with the first phase slated for completion in 2026.

The project takes its name from the former Hellinikon Airport, which shuttered in 2001 and is part of the site on which The Ellinikon is being built. The site also housed facilities for the 2004 summer Olympics.

The Ellinikon aims to be a “smart city,” which McKinsey defines as a place that puts data and digital technology to work to improve the quality of life. Every element should be walkable within 15 minutes.

It will include high-end shopping, restaurants, housing, an athletic club, hotels, office space, and a sprawling public park. Currently the site is home to the Ellinikon Experience Center and Park, where visitors can get an idea of what’s to come.