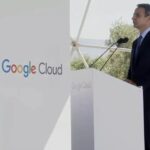 A very large investment – with emphasis mainly on Cloud infrastructure – which will have a direct impact on the Greek economy is currently being presented at the Stavros Niarchos Foundation Cultural Center.

The announcements are being made by the president of Google Cloud International, Adaire Fox-Martin, and the president of SE Europe of Google, Peggy Antonakou, in the presence of Prime Minister Kyriakos Mitsotakis.

As the President of Google Cloud International, Adaire Fox-Martin, pointed out, citing a relevant study, the investment of the American IT giant will contribute a total of 2.2 billion dollars to the Greek GDP by 2030 and will support the creation of over 19,400 new jobs.

“This investment can become a springboard for a better future for our country,” Kyriakos Mitsotakis said for his part, noting that “I have not hidden from the first moment my vision for a great digital leap for our country and a key tool is the Greece 2.0 project, an active core of the transformation of our homeland”.

“I am particularly happy about Google’s important decision to create a Cloud Region of Greece” added the Prime Minister as he emphasised that “these investments upgrade our country on the world map of capital utilisation”.

“Leaps were made in the use of technology, cloud infrastructures were strengthened, and of course, the public could not be left behind as it turns to cloud infrastructures, while a new institutional intersection will facilitate public and private entities to get on the bandwagon of the technologies of the future” he added.

As he said, at the same time, the process of shielding personal data is progressing, stressing that technology is not an end in itself, but also a means to better serve the citizen. He characterised what had happened in the last three years with gov.gr it as a “silent revolution”, through which there is less hassle but also a benefit for the administration as employees can be used in other sectors.

Google’s plan and the impact on the Greek economy

With an important and multi-level investment plan both in cloud infrastructure and in actions and training programs, digital business transformation, etc. is preparing to upgrade its position in our country and the multinational giant following the path set by Microsoft and Amazon Web Services. A development that is expected to further strengthen the digital profile of the country, which through a network of large investments in submarine cables and data centers will develop into a “digital gateway ” of the EU.

The announced project aims to create new Google cloud infrastructures in our country, with which Google will now upgrade the speeds and capabilities it currently provides to its customers through its network of services.