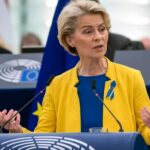 The European Commission President, Ursula von der Leyen has decided not to propose a wholesale gas price cap, as Politico reports, effectively rejecting the appeals of the 15 EU countries – including Greece – as well as European Commissioners, who called for a unified response to the high prices of natural gas. Von der Leyen’s decision was relayed to European diplomats during a briefing by Commission Secretary General for Energy Ditte Juul-Jørgensen on Wednesday. The Commission, he said, would alternatively present a non-paper with proposals for common markets.

Diplomats commented to Politico that Berlin has warned the president of the Commission not to propose a ceiling. Germany argues that any cap would lead to political redistribution between EU countries rather than allocation by market forces. Should von der Leyen propose the cap, Berlin believes it will be more difficult to prevent it in the European Council.

Commission experts, Council President Charles Michel, and many economists argue that the same effect the cap would have could also be achieved through common markets, as EU countries would no longer outbid each other and raise prices.