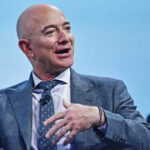 Jeff Bezos has warned a US recession is looming and advised consumers and businesses to stockpile cash in case there’s a devastating downturn.

“Things are slowing down, you’re seeing layoffs in many, many sectors of the economy,” he continued. “The probabilities say if we’re not in a recession right now, we’re likely to be in one very soon.”

Bezos recommended that American households delay big-ticket purchases such as new TVs, refrigerators, and cars, given the risk that economic conditions worsen. Similarly, he suggested that small-business owners consider holding off on investments in new equipment and build their cash reserves instead.

The e-commerce pioneer declined to estimate how long the recession could last, but he urged people to be ready for an economic disaster.

“Take as much risk off the table as you can,” he said. “Hope for the best, but prepare for the worst.”

Bezos’ latest comments echo his response to Goldman Sachs CEO David Solomon in October when the bank chief said there’s a good chance of a US recession.

“Yep, the probabilities in this economy tell you to batten down the hatches,” Bezos tweeted at the time.