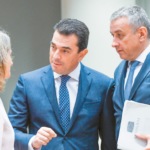 France, Spain and other member states have called on the European Commission to “significantly raise its ambition” on a proposed EU gas price cap ahead of an extraordinary meeting of the bloc’s 27 energy ministers in Brussels today (24 November).

The European Commission unveiled its proposal to cap gas prices on Tuesday (22 November), attracting criticism from observers and government representatives who see it as “unworkable”, or even “a joke”.

The Commission proposes to activate the cap if the price per MWh on the TTF index (the benchmark for 80% of the EU market) exceeds €275 for a fortnight in a row and the difference with the world price of liquified natural gas (LNG) is equal to or greater than €58.

However, if the price of gas has already reached €275/MWh, it has never remained at this level for a fortnight in a row.

“Even at the height of Putin’s gas manipulation last August (Nord Stream turbine), the price did not stay above €275/MWh for more than a week,” recalled Phuc-Vinh Nguyen, an energy policy researcher at the Jacques Delors Institute.

Amazon to cut approximately 10,000 people from its workforce (infographic)