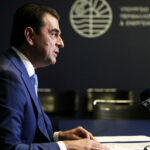 The state subsidies regarding electricity and natural gas bills for the month of December were announced on Friday morning (11/25) by Energy Minister Kostas Skrekas.

Mr. Skrekas initially referred to Greece’s attempt to achieve a lower cap at the European Union level for natural gas, speaking of a difficult battle that will continue on December 13, and then announced the subsidies for electricity and natural gas.

For all main and non-main residence benefits without income criteria:

For farmers, the subsidy will be horizontal and will amount to 221 euros per megawatt hour.

The total subsidy for the households and businesses in December amounts to 435 million euros (282 million for households) with most of them coming from the mechanism of taxation of excess profits and has yielded more than 2.5 billion euros, as Kostas Skrekas explained.

For natural gas, DEPA will provide a horizontal subsidy of 15 euros per thermal megawatt hour, a measure that concerns 700,000 domestic consumers.

“The government will continue to stand by households and businesses for as long as this crisis continues. We will be by their side during this difficult winter” concluded the Minister of Energy.