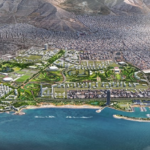 Renowned for its iconic, ancient architecture perched atop dusty hilltops, the Greek capital of Athens is not usually associated with green, open space. But this may soon change, as the city’s former international airport and its surrounding waterfront is set to be transformed into a giant coastal park bigger than London’s Hyde Park.

The site of Ellinikon International Airport, once a bustling gateway to Greece, has lain empty for almost two decades. After being decommissioned in 2001, the structure was left abandoned, besides a brief period during the 2004 Summer Olympic Games, when it hosted a softball pitch, a hockey field and a fencing venue. Today, rust-colored weeds, parched by the sun, poke out from old stands, in a sad turnaround from its glory days.

Early next year, developers will break ground on the Ellinikon Metropolitan Park, a 600-acre restorative landscape that will inject new life in the area and hopes to serve Athenians as a park, a playground, and a cultural center, while also strengthening the climate resiliency of the city.

“This is a generational and transformational project for Greece,” said Michael Grove, landscape architect for Sasaki, the Boston-based firm responsible for the project’s design. Athenians were “frustrated that this was an empty piece of important public land for 20 years,” he added. Sasaki is famous for its landscape architecture and urban design, responsible for New York’s Greenacre Park, Charleston Waterfront Park, and the 2008 Beijing Olympic Green.