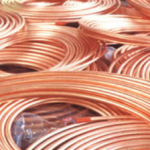 The warnings keep getting louder: the world is hurtling toward a desperate shortage of copper. Humans are more dependent than ever on a metal we’ve used for 10,000 years; new deposits are drying up, and the type of breakthrough technologies that transformed other commodities have failed to materialize for copper.

In what could prove a game changer for global supply, a US startup says it’s solved a puzzle that has frustrated the mining world for decades. If successful, the discovery by Jetti Resources could unlock millions of tons of new copper to feed power grids, building sites and car fleets around the globe, narrowing and possibly even closing the deficit.

At its simplest, Jetti’s technology is focused on a common type of ore that traps copper behind a thin film, making it too costly and difficult to extract. The result is that vast quantities of metal have been left stranded over the decades in mine-waste piles on the surface, as well as in untapped deposits. To crack the code, Jetti has developed a specialized catalyst to disrupt the layer, allowing rock-eating microbes to go to work at releasing the trapped copper.