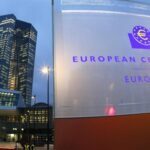 Eurozone wage growth is expected to be “very strong” this year, beating historical records and partially negating inflation that has been derailed since 2021, according to a European Central Bank (ECB) paper published today.

“Wage growth over the coming quarters is expected to be very strong relative to historical trends,” mentioned the authors of the paper published in the monthly bulletin of the monetary institution.

This increase will reflect “some convergence between wages and increased inflation rates” seen from 2021, they point out.

In the eurozone, the annual increase in consumer prices fell below the symbolic 10% mark in December after a year and a half of continuous increases.

But due to the undermining of wages by prices, today “real wages are much lower” than in 2019, ” before the pandemic” of Covid-19, the authors of the article explain.

In the second quarter of 2022, the rate of annual real wage growth was negative, at -5.2% in the euro area, according to their article.

This could lead unions “to demand bigger wage increases in future bargaining rounds”, particularly in low-wage sectors, the authors add.

In Germany, the service workers’ union Verdi is currently demanding a 15% pay rise for around 160,000 workers at postal giant Deutsche Post and 10.5% for the 2.5 million federal state civil servants and communities.

The strong wage increases that will be given will also reflect the good health of the labour market, despite the economic slowdown, ECB estimates.

Gross wages in the eurozone have risen by 4.5% in 2022 and are expected to rise by 5.2% this year, according to the latest ECB forecasts.

In the medium term, “downward pressure” will again weigh on wage growth due to the economic slowdown and uncertainty amid Russia’s war in Ukraine, the authors of the ECB paper conclude.