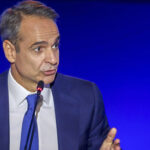 Prime Minister Kyriakos Mitsotakis is scheduled to hold a press conference on Monday.

As the government spokesperson, Giannis Oikonomou, briefed the press corp on Thursday at noon, Mitsotakis is expected to take part in a press conference on economic issues.

Specifically, the PM is expected to speak about the economy, development, and the government’s initiatives in the labour market.

According to sources, this is the first of a series of thematic interviews that the prime minister will give in the next period in which he will describe the government’s actions on specific issues and outline the goals that have been set and the initiatives that will be undertaken.

Medvedev: If Russia loses the conventional war in Ukraine it could trigger nuclear conflict

NATO Chief at Davos: “Weapons are the way to peace”