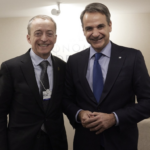 In the afternoon, the Greek Prime Minister Kyriakos Mitsotakis had a meeting with the CEO of the high-tech company Intel, Patrick Gelsinger, in the context of the World Economic Forum in Davos, Switzerland.

During the meeting the investment opportunities offered by Greece and the possibilities of cooperation were discussed.

The CEO of Intel congratulated the Prime Minister on Greece’s performance in recent years. “You did an excellent job, in difficult circumstances”, he said.

Earlier the Prime Minister had a meeting with the President of Moldova Maia Sandu where the challenges arising from Russia’s invasion of Ukraine and Moscow’s instrumentalization of natural gas exports were discussed.

Jacinda Ardern is resigning as prime minister of New Zealand

The Prime Minister underlined that Greece is investing in the development of infrastructures that will further upgrade its role as a hub for the inflow of energy in southern Europe, but also as a pillar for strengthening energy security and the uninterrupted supply of the wider region, including Moldova.

Kyriakos Mitsotakis congratulated Ms. Sandu on the fact that Moldova has undertaken the organization of the next session of the European Political Community and expressed his support for the European perspective of the country.

The Prime Minister also had a brief meeting with Klaus Schwab, founder and Executive Chairman of the World Economic Forum.