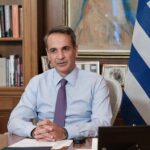 “Great news in the fight against high energy prices! The majority of the 15 member states now support the request to the Commission to apply a price ceiling for natural gas,” wrote Prime Minister Kyriakos Mitsotakis referring to the letter signed by 15 EU countries ahead of the meeting of the energy ministers of the EU member states on Friday (30/09).

Great news in the fight against high energy prices! A majority of 15 Member States now back the request to the Commission to implement a price-cap on natural gas! https://t.co/z4YaC7vsFS pic.twitter.com/Evmz0dQO7e

A letter was drawn up specifically for the wholesale price ceiling at the initiative of Greece, Italy, Belgium, and Poland, signed by a total of 15 EU member states.

In the letter addressed to the Energy Commissioner, Kadri Simpson, the 15 signatory ministers from Belgium, Bulgaria, Croatia, France, Greece, Italy, Latvia, Lithuania, Malta, Portugal, Poland, Romania, Slovakia, Slovenia, and Spain, called on the Commission to submit a proposal to be discussed at the extraordinary Energy Council on 30 September, followed by a legislative proposal as soon as possible.

1049 Brussel
Dear Commissioner Simson,
The energy crisis that started last fall has gotten worse over time and is now causing untenable
inflationary pressures which are hitting our households and our businesses hard. We acknowledge
the efforts made by the Commission and the measures it has put forward to face the crisis. But we
have yet to tackle the most serious problem of all: the wholesale price of natural gas. The price cap
that has been requested since the beginning by an ever increasing number of member states is the
one measure that will help every member state to mitigate the inflationary pressure, manage
expectations and provide a framework in case of potential supply disruptions, and limit the extra
profits in the sector.
The cap should be applied to all wholesale natural gas transactions, and not limited to import from
specific jurisdictions. It can be designed in such a way as to ensure security of supply and the free
flow of gas within Europe, while achieving our shared objective to reduce gas demand. This cap is
the priority and can be complemented with proposals to strengthen the financial oversight of the
gas market and develop alternative benchmarks for gas pricing in Europe.
In light of the above, we the undersigned Ministers of Energy call on you to present us with a
proposal in this direction to be discussed at the extraordinary Energy Council of 30 September,
followed by a legislative proposal as soon as possible.
Thanking you for your consideration, we remain at your disposal,
Yours sincerely,
Tinne Van der Straeten, Minister of Energy, Belgium
Rossen Hristov, Minister of Energy, Bulgaria
Davor Filipovic, Minister of Economy and Sustainable development, Croatia
Agnès Pannier-Runacher, Ministre de la Transition énergétique, France