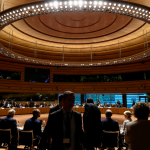 U.K. and European Union negotiators in Brussels are closing in on a draft Brexit deal with optimism there will be a breakthrough before the end of the day Tuesday, two EU officials said.

Any draft legal text will hinge on whether Prime Minister Boris Johnson believes he has the support of the U.K. Parliament, with the backing of the Northern Irish Democratic Unionist Party crucial. Officials cautioned talks haven’t finished yet and there’s work still to do.

The pound surged after -’s initial reports, climbing as much as 1.5% to $1.28, the highest level in nearly five months.

While there’s some finalizing to do, there are clear indications that negotiators will present a legal text on Wednesday morning for EU governments to scrutinize, an official said. That would only be possible if there’s a green light from Johnson, a separate official said.

Negotiators have approached — and even managed to strike — a Brexit deal before, only to see it shot down by the British government or the House of Commons, and EU negotiators are aware of Johnson’s need to get the DUP on board. This could complicate clinching a deal by Tuesday’s midnight deadline and shift focus to a summit of EU leaders that starts in Brussels on Thursday.

Tesla Dominated American EV Sales Over The Past 3 Years (infographic)