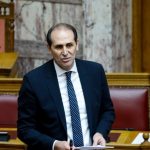 The deadline for filing income tax statements has been extended till 3 pm on Monday, August 31, the Deputy Minister of Finance, Apostolos Vesyropoulos, announced. The initial extension expired today.

The leadership of the Ministry of Finance planned to give a three-day extension to the submission of statements, due to the problems caused by the coronavirus. However, another issue of concern was the fact that tax payers who planned to use the 3-day extension until Monday would also have to also pay the first two installments on the same day.

As noted in the announcement, the Payment ID on the Taxisnet personal account of the taxpayer does not appear instantly upon the filing of the tax statement, but is created and displayed a short time later. This would cause the risk of some citizens not being able to pay via e-banking before Monday midnight, if the submission of the declarations did not end earlier.

Thus, they would have submitted the declaration on time, but the appearance of the ID and the payment would have been delayed until the first hours of Tuesday, September 1st, with consequent late payment surcharges.