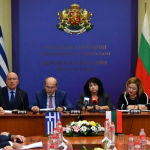 Bulgaria’s Energy Minister Temenouzhka Petkova and her Greek counterpart Kostis Hatzidakis signed a number of contracts for the Bulgaria-Greece natural gas inter-connector pipeline (ICBG) in Sofia on October 10, most notably for a 110 million euro loan from the European Investment Bank (EIB).

These included contracts with suppliers, but also an inter-governmental agreement that guaranteed unchanged taxation for the pipeline for a period of 25 years.

The project has been repeatedly delayed despite securing EU financing early on, with an investment decision agreement signed in December 2015, more than a year after the initial target for the pipeline’s start of operation.

Earlier this year, ICBG picked Greek company J&P Avax to build the 183km pipeline for 144.85 million euro, with another Greek firm, Corinth Pipeworks Industry S.A., chosen to supply the pipes for the pipeline at a cost of 58.23 million euro. The total cost of the project, according to estimates by Bulgaria’s Energy Ministry, is 220 million euro.