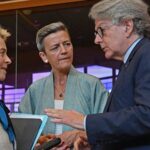 The ambitious €300 billion plan presented by Ursula von der Leyen is based on three pillars: Introducing more non-Russian gas, faster development of renewable energy sources, and greater efforts to save energy in public buildings, businesses, and households. Of that 300 billion euros, about 10 billion will fund gas and liquefied natural gas (LNG) infrastructure to halt imports from Russia. The rest will be used to finance the acceleration of the transition to clean energy.

According to the Commission proposals, €300 billion will be needed in additional investments, which the EU intends to support by releasing more funds for the energy transition from the COVID-19 recovery fund. In the gas sector, Russia accounted for about 45% of total EU gas imports in 2021. In recent years, this figure has averaged around 40%.

The other major suppliers of gas to the EU were Norway (23%), Algeria (12%), the United States (6%), and Qatar (5%). In 2022 the imports of natural gas in the EU fell to just 22%. The Commission proposes that member states consider increasing imports of liquefied natural gas from countries such as Egypt, Israel, and Nigeria, as well as the infrastructure needed to rapidly break free from Russian fuels.

As President von der Leyen put it, “The EU government leaders agreed to set up a platform for the joint purchase of gas, LNG, and hydrogen.”

“We know that when Europe acts together, it has more clout. The leaders of the EU-27 governments have agreed to set up a platform for the common market for gas, LNG, and hydrogen. As part of our REPower EU project, we propose a business-to-business approach, with a common procurement mechanism and a common approach to supplier countries. In this way, we can ensure the import of energy we need without competition between our Member States, ” she said.