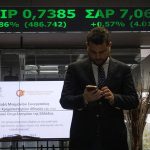 The Greek government has ordered BNP Paribas, Citi, Goldman Sachs, HSBC and JP Morgan to seek up to 1.5 billion euros from the markets.

The new bonds will have the same terms with the previous bonds issued in March but different pricing (lower interest rate/borrowing cost for the Greek government) as the image of the Greek economy on international markets has improved significantly since March.

Specifically, the 10-year lending yield in March was 3.9%, a difference of 373 basis points from the corresponding German one. Today the cost for the 10-year bond stands at 1.4% – with the spread (additional burden on the Greek government compared to the German) falling to 199 basis points.

Given that the Greek Public Debt Management Agency will offer investors a premium on the market value of return on equity, it is estimated that the final yield on new bonds will be in the range of 1.45%.