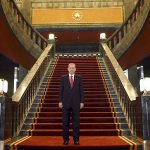 Turkish President Recep Tayyip Erdogan is doubling down on his highly precarious monetary policies in an effort to buttress the country’s failing economy, while distracting the public’s attention from the gradual depreciation of the Turkish currency.

Turkey’s sovereign wealth fund will inject 21 billion liras ($3 billion) into three state lenders to strengthen their capital positions and minimize the impact of the coronavirus pandemic that may provide a $24 billion boost to the market.

Turkiye Varlik Fonu, the fund also known as TWF, will boost the core capitals of TC Ziraat Bankasi AS, Turkiye Halk Bankasi AS and Turkiye Vakiflar Bankasi TAO, the fund said in an emailed statement. Halkbank and Vakifbank said in separate public filings that the fund will purchase newly issued shares. The fund will finance the cash injection via bond sales by the Treasury and Finance Ministry to banks in the local market, it said.

Tesla Dominated American EV Sales Over The Past 3 Years (infographic)