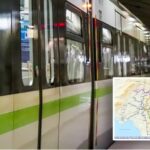 “Let us have no doubt that this project is so important that it will cause a lot of disturbance in neighbourhoods of Athens and we will need the help of the municipalities,” PM Kyriakos Mitsotakis said yesterday during the signing ceremony of the contract for the construction of metro line 4.

His statements were aimed at opposition parties but also the local reactions in Exarchia and Kolonaki that have indicated they would be protesting the construction of line 4.

The project, which will include 15 new stations and shorten the distance from Galatsi to Goudi, is one step ahead of the start-up phase, despite the fact that it is estimated that it will take at least another year to start the main construction.

Welcoming the signing between “Attiko Metro SA” and the “J&P Avax SA – Ghella SpA – Alstom Transport S.A” group of companies, the PM noted, “I am happy that we will sign a contract for the largest public project that will take place in our country.”

The colossal project will cost €1.2 billion and is estimated to take 8 years (with the most optimistic plan) for completion.