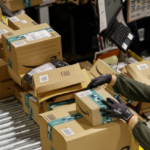 Amazon has generated massive multibagger gains since its initial public offering (IPO) on May 15, 1997. The stock went public at $18, or a split-adjusted price of $1.50 per share. If you had invested just $5,000 in that IPO, your stake would be worth nearly $11.4 million today.

Investors might be kicking themselves for missing out on those life-changing returns, but Amazon has also generated multibagger gains for investors who bought shares long after it became the 800-pound gorilla of the e-commerce market. In fact, a $5,000 investment in Amazon on the first trading day of 2015 would still be worth about $55,000 today.

Let’s see why Amazon experienced such a growth spurt over the past seven years, and if that momentum will continue in the future.

Project Tasmania: This mysterious, indestructible “Black Box” will tell the future what happened to us

2015 marked an inflection point for Amazon because the company finally started breaking out Amazon Web Services’ (AWS) revenue and operating profits in its quarterly reports.

Amazon launched the first version of AWS in 2002, but investors didn’t know how fast the cloud infrastructure platform was actually growing or if it was even profitable. Amazon answered both questions in the first quarter of 2015: AWS was generating high-double-digit percentage revenue growth, with much higher operating margins than its e-commerce business.