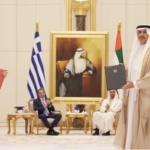 The cooperation agreement reflects the position of ADQ as a long-term investor in the Greek economy. Its investments are expected to accelerate the financing but also to support the development of key sectors of the Greek economy.

The agreement was ratified with the signatures between Mr. Ioannis Tsakiris, Deputy Minister of Development and Investment, and His Excellency Mohammed Hassan Alsagwadi, CEO of ADQ, while His Highness Sheikh Mohammed Bin Z was also present during the event, along with the Prince of Abu Dhabi and Supreme Commander of the Armed Forces and the Prime Minister of Greece Mr. Kyriakos Mitsotakis.

Nick Cave: New tragedy for musician – His second son died seven years after the death of his other child

The agreement seals the development of economic ties between the two countries and is expected to lead to significant investments in Greece. Hellenic Development Bank, Hellenic Development Investment Bank and ADQ are expected to invest separately and jointly in important sectors of the economy, including renewable energy sources, but also in infrastructure, agritourism, health technology and science projects, among others.